s well as Somali cats, we are also honoured to share our home with a very special neutered female moggie, called Fern.

Fern came to us in 1999, a tiny little bundle of fluff whose survival was doubtful. She'd been abandoned in a condemned house and a council team discovered her and her siblings when checking the house prior to demolition. The kittens were taken back to the council's head office, where my sister-in-law works, and I was asked if I wanted to give one of the kittens a home. And that was how Fern -- as she became known -- came to us. 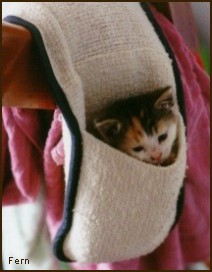 When she arrived, Fern was only 20 days old, and her eyes and ears were still closed. We hand-reared her, worried that she would not survive despite the care we were giving her. We need not have worried; Fern proved to be a survivor, a fighter, and from that moment on life in the house has never been dull :)

Now a feisty adult, Fern has a gorgeous combination of colours in her coat, ranging from gold and ginger to very deep black, with lots of white. She tolerates our Somali, Narya, with a mixture of irritation and patience, and she will always be our special baby girl.

Fern likes to cuddle or be stroked, as long as it is on her terms. She will come to you, not the other way around. However, she always senses whenever something is bothering one of us and will come and cuddle as if to say, "everything will be okay, you'll see". We are blessed to have such a wonderful cat in our lives!

Fern's favourite toys are soft, squidgy balls that she can carry around the house -- she often takes one to the top of the staircase and drops it down the stairs, only to chase after it moments later and start the whole process over again!