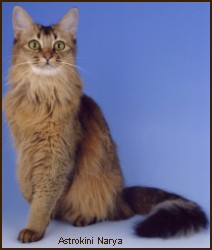 Astrokini Narya -- aka Narya, Naryakini or Naryanka -- was born in March 2003, and came to live with us in June of the same year. Her colouring is known as "usual" because it is the usual coat pattern for Somali cats. Bred by Sandra Melia of Astrokini Somalis, Narya was named after Gandalf's ring, the ring of fire, in The Lord of the Rings, as the entire litter had names inspired by Tolkien.

Narya is a very beautiful cat, but she shares a kind of love-hate relationship with our neutered moggie, Fern, and our other Somali, Crystal. She loves heights and her favourite toys are anything she can chase -- literally!

Click here for detailed reports from Narya's judges between 2003 to the present.

Narya's Gallery
Narya is a natural flair for the camera, one evident since she was small. Here you can see some pictures of her. 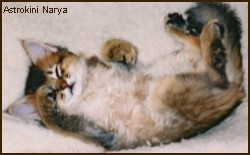